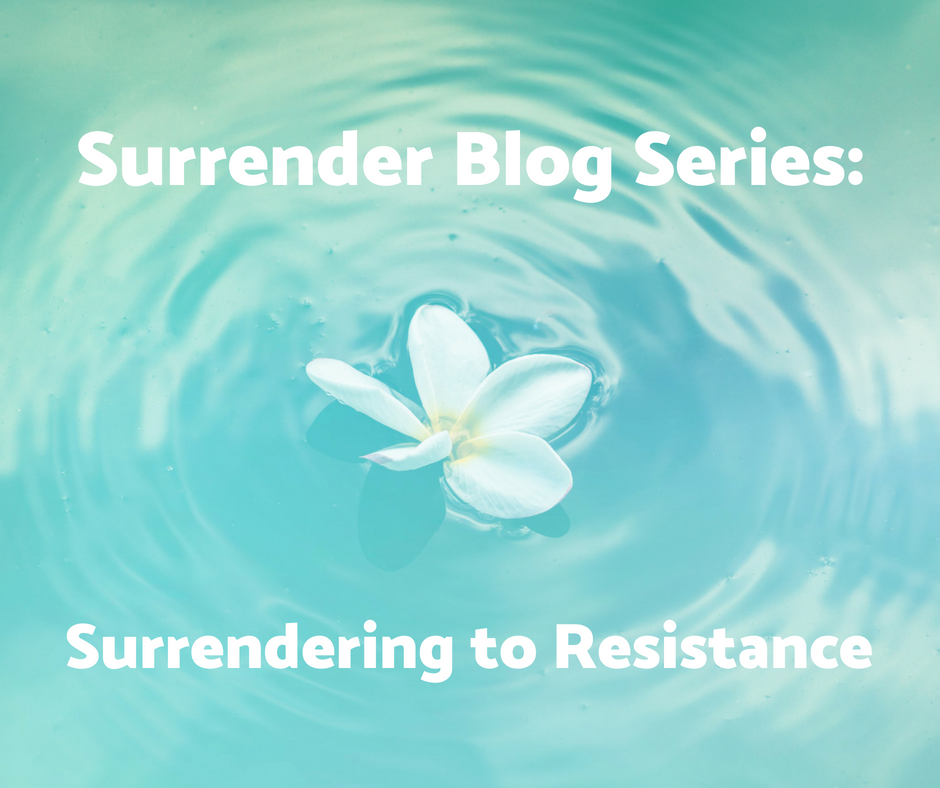 I’m writing a three-part series on surrender because it’s so powerful in receiving what you want. I have been particularly challenged with it lately: in my personal life with my wedding, and in my business, which is shifting and growing.

Surrender is difficult because our subconscious likes to keep things predictably the same. It’s safer that way. The unknown is scary, and surrender is all about walking into the unknown. It’s about having trust in yourself and trust in the universe that things will happen… in their own way and in their own time. If you say you want change in your life, you need to surrender instead of fighting to control everything. It’s not easy; it takes strength and courage.

The real truth about surrender is that without it, nothing ever changes.

Resistance is the refusal to accept your current circumstances. It’s accompanied by a physical feeling of heaviness, tightness, pain, discomfort, etc. because you are pushing against what you refuse to accept. Resistance is always a fight; it is the opposite of acceptance and surrender. Acceptance doesn’t mean you’re happy with the situation, or that you are resigned to it being this way forever. It simply means you accept things as they are.

Let’s say you’re standing in a pool of water. This is what resistance and acceptance look like:

Resistance: I hate water and don’t even want to think about it, so I’ll pretend I’m on dry land and no one can convince me otherwise.

Acceptance: I’m in water. I’m cold and I don’t want to be here, so eventually I will find a way to get out, but for now this is where I am.

Even though surrender is much easier than resistance, it can be challenging to get there because of all the expectations you put on life. You think the universe needs to cooperate and align with your expectations in order to feel good. It’s actually the opposite. By letting go of resistance, you can actually relax and enjoy the opportunities of life.

You resist surrender when you don’t believe you can have what you want. Because of this belief, you block opportunities. Even if you hate your circumstances and are in a constant state of struggle, look at it as an opportunity to practice surrendering. Yes, struggle can actually be a gift.

When you surrender, you stop fighting reality. You accept you’re standing in water, which allows you to shift your focus away from the problem and release it. You stop putting energy toward trying to pretend you’re on dry land. Whether standing in water ceases to be a problem or remains a problem is not for you to worry about. It is about seeing reality for what it is and trusting that possibilities and opportunities will emerge… perhaps even ones you hadn’t considered. Maybe someone will stand in the water with you, making the experience actually enjoyable, or bring you an amazing raft to float on.

When you resist, you make no room for anything new and different to happen. Surrendering allows life to transform because you’re not trying to control everything.

How I have Surrendered to Resistance

I used to say I wanted a committed relationship, but I resisted changing anything about how I went about dating. So of course, nothing changed. I wasn’t in a relationship because of ME—not the universe or some mysterious force keeping me away from what I wanted. Once I accepted my approach to dating wasn’t resulting in what I wanted, I was able to change it. I surrendered. Instead of judging potential dates thinking I knew where it was going to lead, I was grateful for the opportunity to learn more about myself. My heart was open, and it wasn’t long before I met my future husband. If I had stayed in resistance and not surrendered to possibility, I would not be in a relationship with him.

With work, I have had a lot of resistance around growing my business As much as I said I wanted it, it scared me. Part of me wanted to play small, not wanting the responsibility of showing up to a larger audience. Another part wanted to maintain control over everything so I could decide how I spent my time. At one point I even thought about downsizing! But each time I felt resistance, I reminded myself of what I wanted and surrendered. I still don’t know what the future holds, and that’s ok. I keep leading with curiosity and am constantly getting out of my own way!

Look at the stories in your head which tell you not to surrender. The ones that tell you to fight or complain, to look for problems and solutions or to make everything into a drama. This is resistance, so pay attention. Don’t try to stop them… simply allow and become an observer. These stories are usually repetitive and have been there for decades. They are meaningless, so instead of trying to ignore them or shut them up, surrender. Surrendering doesn’t make them true, it just acknowledges they are there. They will run out of steam naturally.