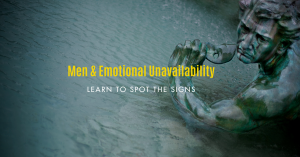 You look around at the people in your life who appear to be in happy relationships. Plus those who want to be in one, but are comfortable with singlehood until that happens. You’re not in either camp. You are beyond ready for a functional relationship, but it feels elusive (and you’re exhausted).

You reflect back on your exes with their laundry list of issues: couldn’t commit, not over his ex-girlfriend, manipulator, narcissist, disappeared without a trace, only shows up when he’s lonely, married, won’t grow up, etc. The list reads more like a horror movie than a rom-com.

Why do you keep attracting emotionally unavailable men who have zero relationship potential?

Where are all the normal ones hiding, and why is your “picker” so broken?

Why do other people stumble upon happy relationships (seemingly by accident, with no effort) while you put all this work into finding someone, only to end up disappointed and needing to start all over again?

I used to ask myself those same questions without reaching any helpful answers. Then, after some work on myself and personal reflection, I started to look at the common denominator in all my failed relationships. Yep, it was me.

This led to a new question: What was I doing to attract these men? What was my role? If I changed what I looked for in a man, and how I showed up, maybe I could filter out the bad matches… or at least spot the emotionally unavailable signs sooner and save myself a lot of pain.

When you grow up insecurely attached like I did (more on that below), getting involved with men who are emotionally unavailable is a common pattern. It feels safe because it’s what you’re used to, even though it’s not what you want.

If you are like I was, you’re probably used to inconsistency–when a partner says one thing, but does the opposite. Like saying he wants to see you, but doesn’t make a plan. Or promising to be exclusive with you while he’s committed to someone else. You don’t like this behavior and it creates anxiety, but you put up with it because it’s familiar.

You may also find it hard to trust others because you don’t trust yourself; particularly your own judgment. When you’re disconnected from yourself, you second-guess everything. Is he lying to you, or are you too cynical? Is he cheating on you, or are you just acting paranoid? You don’t know what to believe.

You might even defend your partner’s actions to friends and family, making excuses for his bad behavior (even though it makes you furious). Maybe you threaten to leave, but never do. And every time you let him off the hook, your self-esteem drops. You believe you don’t deserve better, so you put up with more bad behavior. The cycle continues.

There is one good thing about patterns, however. Once you’re aware of them, you can break them. It isn’t easy, but once you understand your own patterns and where they come from, it will be easier to spot emotionally unavailable signs in others. Keep reading for 10 of those signs.

But first, it’s important to realize you attract people exactly where you are.

What does this mean? You can’t attract a man who is emotionally healthy unless you are healthy too, because someone who is open and expressive doesn’t want a partner who is shut down and distant. Even if you manage to get past a few dates, it won’t last. So, if you are disconnected from yourself and wear an emotional suit of armor, that is the type of man you will attract.

How This Plays Out in Your Life

For years I said I wanted a relationship, but sabotaged myself at every turn. I was afraid of being stuck in the wrong relationship, but that’s exactly what I created for myself. I would ignore red flags, subconsciously choosing someone who wasn’t a match. Why? It meant I wouldn’t be stuck with the wrong person (but it also kept me away from the right person!). When things fell apart I was simultaneously disappointed and relieved. This was my pattern for years, and it was safe because it meant I never had to get close to anyone. Uh, hello, fear of intimacy!

Walls go up when your head takes control and runs amok with fear-based stories. I compared these men to what was familiar: my other unhealthy insecurely attached relationships. If I wanted to be in the RIGHT relationship, I had to look at who I was choosing and why. I had to look at my fear of intimacy, and the negative beliefs that told me: I wasn’t good enough, I didn’t deserve happiness, there was something terribly wrong with me and I was meant to be single forever.

What you believe about yourself plays a big role in who you attract. If you believe you are unworthy of love, you’ll attract a partner who doesn’t show you love (and probably doesn’t have much love for himself). If you believe something is wrong with you–that you have some fatal flaw–you’ll hide who you are and attract someone who wants that person (not the REAL you).

If you believe you’re destined to be single, you will subconsciously look for men who don’t want a serious, committed relationship. The signals you put out there are what others respond to… so you want to know what those are!

Creating distance to avoid intimacy is another hallmark of emotional unavailability. This distancing can take many forms: a dating checklist, looking for problems in a potential partner, choosing partners you don’t see a future with, picking fights, avoiding difficult conversations, shutting down, giving the silent treatment, withholding attention, etc.

People who are insecurely attached crave intimacy while being deathly afraid of it. And I’m not talking about physical intimacy here, which is often used as a replacement. Emotional intimacy is sharing who you truly are–all of it. It’s open, vulnerable, generous and brave. It also comes with the risk of being rejected or abandoned, which is why it’s so scary.

If you are already on shaky ground with your sense of value and negative beliefs, you’ll go to great lengths to avoid being rejected. That usually means the emotional walls go up and distance is created to keep yourself “safe.” But that safety is what keeps you from having a healthy relationship. It’s what keeps you attracting men who aren’t available.

So how did you get here?

If your parents or caregivers were consistent in their love and attention, making you feel safe, you probably grew up feeling secure. Your emotional needs were met, so you didn’t need to look for love in unhealthy ways. It was reliably there, no matter what you did, and you weren’t afraid of losing it.

If, however, your caregivers were dysfunctional, distant, inconsistent or intrusive, they probably caused you distress. You didn’t feel secure, so you either worked hard to receive love, or you walked on eggshells so love wouldn’t be taken away. Perhaps both.

When love and attention are not consistent, kids often feel the need to perform in order to get it–whether that’s being a star athlete, straight-A student or even a troublemaker. When a parent’s behavior is unpredictable (as is common with alcoholism or other addiction), kids work hard to keep the peace by accommodating their parents’ wishes.

If love isn’t freely given, kids look for it where they can and/or transform into someone else in an effort to get it. And they learn to modulate or tone down intense emotional states to avoid losing it. This is when protective shells form to guard against potential pain and loss.

You can probably see how these coping mechanisms, which serve as protection in childhood, provide a giant barrier to healthy adult relationships. The truth is, your parents projected their own insecurities and issues onto you. Their choices had nothing to do with you, and everything to do with their inability to understand and connect with their own emotions.

You aren’t a bad person or unloveable or any of the negative beliefs you developed as a result of your upbringing. You’re just replaying those behaviors from childhood in your romantic adult relationships. In attachment terms, you are likely an Avoidant or Anxious/Avoidant.

And while none of this is your fault, healing yourself is your responsibility. If you aren’t willing to look at your own unhealthy patterns and make an effort to change them, they will continue. So let’s break that bad relationship cycle, shall we?

Spot the Signs of Emotional Unavailability

Now that you realize the emotionally unavailable men you attract are the result of the protective patterns you developed in childhood, you have power to make changes.

The first step is AWARENESS. When you learn to recognize your own distancing behaviors, you’ll be able to spot them more easily in others. And when you practice looking for them in others, you’ll see them more clearly in yourself! It all works together, and it all moves you toward healthier relationships.

Below are 10 emotionally unavailable signs. Learn to spot these early, and you’ll start breaking your bad relationship patterns:

Bonus Exercise: After a date, ask YOURSELF if you exhibited any of these signs. Looking at where you were distant will increase your awareness so you can do things differently next time. Cracked a joke because you were uncomfortable? Acknowledge it (but don’t beat yourself up–it’s ok!).

Next time, resist the urge and sit with the discomfort. Maybe respond with, “Wow, that must’ve been hard,” or some affirming response instead. Each time you do an opposite action, you chip away at your old patterns and start creating new, healthy ones. Do this consistently and emotionally unavailable men will live in the rearview mirror.